Over the past 20 years, open office plans have made their way into the mainstream. Coworking companies like WeWork and tech startups like Google have turned the concept into more of a movement, selling the idea as a way to encourage collaboration.

However, there is recent evidence to show that once you remove the walls, human interaction itself might be at risk.

Back to the Drawing Board? 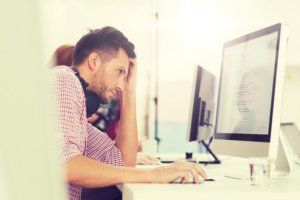 The primary concept behind the open-concept office is to facilitate communication, bring teams together, and foster innovation. But in truth, many such offices report lower job satisfaction across the board.

While this might not be the case at every company, the reasons are relatable.

Take, for example, a study conducted by some Harvard researchers who tracked interactions between employees of a Fortune 500 company before and after an office redesign.

The new layout transformed their conventional workspace to an open office, ostensibly, to improve collaboration. Surprisingly, the results showed a massive reduction in face-to-face interactions after the redesign. Email and messaging application use were off the charts, compared to typical usage before the study began.

Unsurprisingly, this seems to be the case with many collaborative office interiors today. You’ll see people working with headphones on, making a concerted effort to block out their surroundings, including their coworkers. Privacy is non-existent, and digital interaction is preferred over the face-to-face kind.

But it’s not all bad. Open office plans have been around as long as offices have been a thing. From the forums of ancient Rome to the secretarial pools of the 1940s, the open-concept office has performed remarkably well.

At the start of the dot com era, tech startups in Silicon Valley and the Bay Area began experimenting with a new type of collaborative office interior, one that traded traditional office furniture for a more lively, fun, and interactive layout.

According to Mountain View architect Clive Wilkinson, companies were doing this out of necessity, moving into former warehouse spaces where a mutable workforce made splitting up the space impractical.

These offices were loud, and they weren’t ideal, but there was little choice. Over time, this design approach gained a reputation as a disruptive force, and the more radical, the better. Pretty soon, everybody wanted it, and not just for the zeitgeist; it was also a way to attract and retain top talent.

The Case in favor of the Open Office 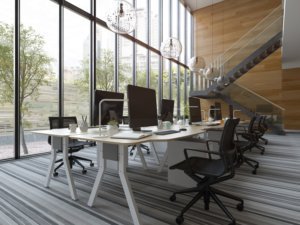 In reality, you can’t paint all open-concept office situations in the same light.

The open office can represent a significant value proposition for a company, reducing costs, and eliminating wasted space in favor of a more flexible approach.

Could it be that the demise of today’s open-concept office is much like its 1940s predecessor?

One theory has it that companies started trying to cram too many people into the open space, creating chaos and reducing productivity. Another points at office furniture itself as the culprit, as the cubicle, designed to bring order, was responsible for feelings of isolation, depression, and chronic pain.

Similarly, collaborative workspace furniture may help the open office rise above it all, providing companies with innovative ways to facilitate interaction without compromising productivity.

To learn more about what collaborative office furniture can do for you, reach out today to set up a free consultation.

We’ve got you covered with financing plans that will cover up to $1.5 million dollars.

Does your whole office need a new look?

Fill out the form and we will be in touch with you promptly. Thank you for your interest!